I wasn’t aware of the PBS Arts Fall Festival until this year, which is lucky or else I would have missed Miami City Ballet perform works by George Balanchine and Twyla Tharp on Friday, Oct. 28, 2011.

Edward Villella, the incomparable founder and artistic director of the MCB, set the tone for the evening with a vibrant introduction, which included a brief synopsis of Balanchine’s Square Dance and Western Symphony and Tharp’s The Golden Section.

Square Dance was a technically flawless classical piece that showcased the company’s musicality and timing. The costumes and background were muted blues and greys so as to not distract the viewer from the dancers’ movements. Western Symphony was the complete opposite. Bright colored costumes, a wild west background and a blend of ballet steps and folk dances gave viewers a chance to see why Balanchine was so fond of the west.

Twyla Tharp’s The Golden Section was quintessentially Twyla. It reminded me a little of a Richard Simmons exercise class. Dressed in gold biketards (ladies), shorts (men) and ankle-length leg warmers (all), the company ran, jumped, punched and “ponied” their way through a fast paced routine. The movement never seemed to stop. One motion always lead naturally into another, even if it was a double pirouette, into a jete, into a spiral turn, into an over-the-head lift. It definitely showcased Tharp’s corky side as well as the dancers strength and stamina.

So glad I didn’t miss it!

If you missed it or want to see more dancing, check out PBS Arts from Chicago: AMERICAN MASTERS “Bill T. Jones: A Good Man” on Nov. 11. 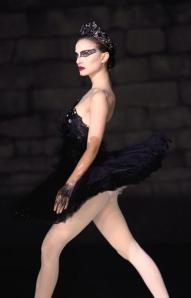 Watch out Julie Kent and Irina Dvorovenko, Natalie Portman might just be the next Snow Queen in ABT’s adaptation of Swan Lake.

I didn’t have high expectations for this movie since the cinema has tried and failed, in my eyes, with dance-focused movies such as “Center Stage” (2000), “Save the Last Dance” (2001) and “The Company” (2003). For me, the lead dancers in each of these movies just weren’t believable. In reality, there is no way Julia Stiles would be accepted into Julliard with her floppy arms and barely there arabesques. And any dancer could tell she wasn’t getting up all the way on her pointe shoes. Neve Campbell was a little more believable in “The Company”, but that’s not saying much. Out of the three, “Center Stage” is the most realistic because, get this, professional dancers played most of the lead roles.

It must be hard finding a celebrity who could handle a dance role such as this one and I wasn’t sure Natalie Portman could do it when I heard she was cast as the lead in the “Black Swan”, a film loosely based off the ballet “Swan Lake”, directed by Darren Aronofsky. But Portman does the art form justice in her role as Nina Sayers, a rising star at a New York City dance company, who would do just about anything to become a principal dancer. Prior to filming, Portman spent a year training and shed 20 pounds and it definitely shows on screen. Besides having the slim ballerina frame, Portman also has the musicality, effortless footwork and flowing arms of a true prima ballerina.

If you think this film is anything like the “Swan Lake” ballet op. 20 by Pyotr Ilvich Tchaikovsky, you are in for a surprise as well as a few shrieks and gasps. This psychosexual thriller is not appropriate for young dancers, which is a shame because it gives dancers a different perspective on the roles of Odette (the white swan) and Odile (the black swan). Young sweet Nina (Portman) is the ideal white swan, but her director (Vincent Cassel) doesn’t believe she has the gusto to be the black swan. Nether does Nina until Lily (Mila Kunis), the bad ass ballerina, joins the company and threatens Nina’s chances of playing the lead.

The movie then takes a turn for the weird as Nina mentally struggles between the white and black swan and believes she is physically transforming into the black swan. It’s the clique struggle between good and evil with a few twists and turns. I don’t want to give too much of the movie away but Portman is PERFECT in the final dance number. When you see the movie you will understand when I mean. 🙂